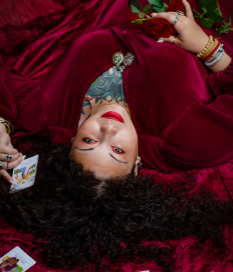 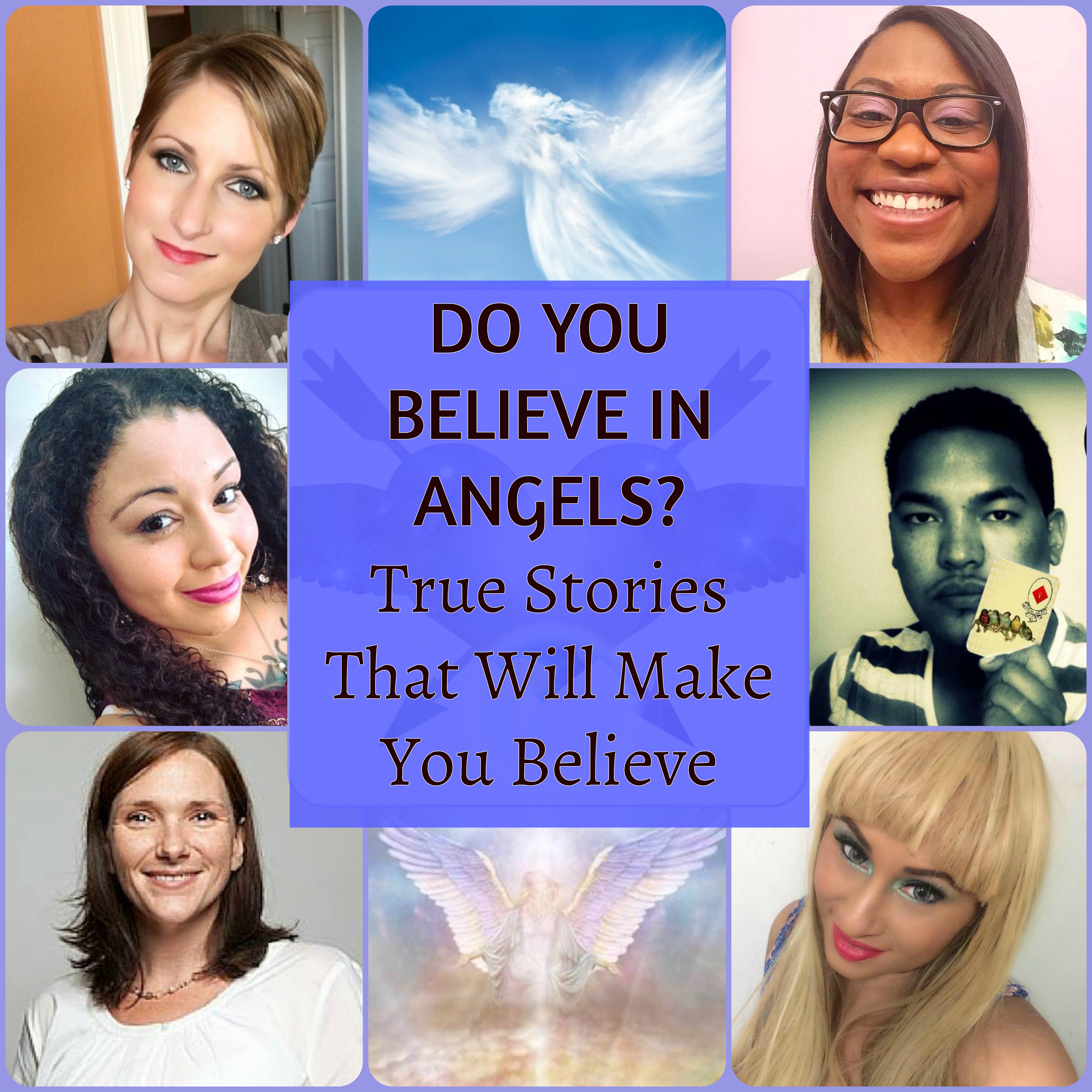 DO YOU BELIEVE IN ANGELS? True stories that will make you believe

Do you believe in angels? True stories that will make you believe.  It is said that 8 out of 10 Americans believe in angels. Taken from the  findings done by a poll done by CBS NEWS.  So what are these divine beings called angels that millions believe in? and why ? Webster defines an  Angel as a spiritual being believed to act as an attendant, agent, or messenger of God, conventionally represented in human form with wings and a long robe or as an attendant spirit, especially a benevolent one.  I believe that angles are divine messengers of God sent by God to aid in all human matters. Nothing is to minor for an angel to aid us with . Angels are sent to strengthen our faith , perform miracles and aid us in our daily lives. I believe also that angels do not always have to appear to us with a halo or with wings. I have heard of many scenarios where Angels also appeared in human form to help a person receive their message or receive help easier. Angels do not always have to appear to us in a physical form though to show us that they are present. They help us through invisible ways as well and confirm this to us by sending us signs.

Some of the most common signs that they send us is repetitive numbers,  their names being shown to us some where or feathers appearing.  I strongly also believe in earth angels. Earth angles are human beings working through God that have the ability touch our lives in divine powerful ways.

It is through personal experiences that our  faith in angels are strengthen and by others stories as well. Angels have a great habit of always confirming things which I feel is a big reason why so many truly believe in them. All you have to do is call upon an angel and ask for a sign.

Here are some true angel encounters by several Angel Divination Readers that will help you believe if you are struggling too.  Angels are real –  powerful – divine – quick to aid – and  are limitless – nothing is to minor that they will not tend to. Call upon them in faith.  May these stories move you.

I really don’t have a big angel story to share. Most of my experience with them has been very subtle – like, the other day, I was really sad and frustrated because my daughter was in the hospital and I couldn’t get answers from the doctors. We decided that she’d be coming home after the doctors were very rude to us and basically verbally ganged up on her and attacked her. I called my son’s preschool to see if they could keep him for an extra hour (it was well within their opening times. No one would have had to stay longer or extra) – but they said NO. I felt so sad, alone and frustrated. I had to drive 45 minutes from the hospital to pick my son up (and back again). When I got on the highway, the first 3 cars I saw had 444 in the license plate – the Angel number. They found a way to let me know that, even though I felt so alone and frustrated, they were there with me, giving me support. That made me feel better instantly. Sometimes the Angels bring little signs of their support… just when you need them.  Website – Youtube – Facebook

The Angels came to me during a period, there were intense family issues that kept me sleep deprived lead me to fall asleep at the wheel while driving to an appointment. My car slid off the road and descended down a 30 meter cliff. During the free fall, a luminous emerald opalescent being appeared in the passenger seat, a profound feeling of peacefulness invaded my soul. He talk to me telepathically, his voice resonated in my head like a gentle echo. He said that he is Archangel Raphael, and that all is going to be fine.
And miraculously, I was. I was able to leave the scene of the accident with only minor scrapes and bruises.
After this life changing event, I found my gifts were amplified and started seeing orbs of light around people, discovering that these spheres were actually angels who were assisting and helping these people.I also discovered that I could communicate directly with the angels and receive guidance on every area of life . The orbs are often captured on camera, you can see them on my weekly Angelic Messages on my youtube channel. Since that day, Angel had been part of my life and their presence had brought huge blessing of miracles.    Website –  Facebook

Blessings , I didn’t see or hear, but I felt Archangel Michael. I had recently discovered Doreen Virtue through the most incredible way. I had hosted a charity garage sale at my home and someone donated one of her books, but it didn’t sell. I decided to keep it and read it. I went from reading that book to her book about Archangel Michael. I had read that you could pray to him when you were scared. I had to fly by myself for a business conference and I had a huge fear of flying. I decided to try praying to Archangel Michael. We were at the point where the airplane is moving toward the runway and the flight crew is giving instructions. I’m normally gripping the seats with white knuckles! Almost immediately I felt incredibly warm, like a blanket was wrapped around me. Then, I started to get very calm. The person sitting next to me started chit chatting with me and completely distracted me and I did not even know we took off. I absolutely KNOW that Archangel Michael was with me for that experience. I’ve continue to pray to him ever since and I’ve really overcome my fear of flying. Facebook

My mystical healing with Archangel Metatron . I was at a spiritual workshop and had been there for a few days. I was learning so much about myself and my connection to spirit that I felt alive and reinvigorated! One night, after the lectures of the day, I had a dream where Metatron’s cube came down in front of me glittering and sparkling in a chamber of brilliant white light. It was so breathtakingly stunning! I didn’t know whether to go inside of it or just continue to stand there in shock and awe. Upon entering the cube, I was enraptured in white healing energy. It was so peaceful and loving! The dream was so clear, so vivid, that I will never forget it. I truly believe this was Archangel Metatron coming to me to give me healing and preparation so that I could move on to the next phase of my ascension process – to become a clearer channel for the knowledge of the Universe and the Universe’s healing energy to work through. Since my encounter with Metatron my spiritual awakening has definitely accelerated! For the validation and clarity of purpose he has given me, I have much to thank him for. He does still come to me from time to time and it is always a grand experience! Website – Facebook – YouTube – mavenunmasked@gmail.com

About 17 years ago I has a dream I was rushed to the emergency room. In the dream I delivered a beautiful baby boy. I was reaching out the grab my son and then I heard the doctor say” Oh wait there’s another one ” suddenly in my dream he pulls out a baby a baby girl this time.  The dream was s the dream was so real that I woke up right away and said a prayer. Suddenly I heard and felt the presence of an angel telling me ” Your dream was meant for a reason.” During this time of my life I wanted to conceive a child but, was told by the doctors countless times that I did not have the ability to do so.  They told me that my 9 year old would be my only child. I prayed to God that that dream was true and was a sign.  Not long after I began to feel sick. I was getting the bathroom redone on my house and the smell was driving me nuts sickly.  Unable to think what else it could be , I decided to take two pregnancy test which both came out not pregnant. I was sad and depressed. Did not want to speak to anyone and during my time in  loneliness a angel came to me again and said “you are blessed with life.”  Months later guess what I had? TWINS!!! The doctors said no but, the divine said YES.  AMEN!! I am so every thankful for my twins. What a divine blessing. Thank you Angels for standing by me.   silvertagstore@gmail.com

This experience saved my life and turned my belief in angels into an absolute truth for me. I was about 9 years old , my mother , brother and sister was in the car while my father stood outside of the car trying to shove a metal pole through the car window on a hot muggy Brooklyn morning.  My mother was in the passenger seat. After my fathers countless failed efforts to put the pole into the car safely he became irritated and told my mother. “I’m done Diana, lets go!! Just try your best to hold the pole up while I drive.” The pole was metal and heavy.  It was impossible for my mother to hold it up for a long period of time. Even worse If the car stopped short the pole would have ran right into us children in the back seat. My father got into the car and out of no where a homeless man appeared. He was dark skinned dressed in ragged clothes but, appeared healthy looking. He grabbed the pole and said ” DON’T HURT MY CHILDREN, LET THEM LIVE” and re-position the pole in a safe way. We were all shocked.. who in the world was this man coming up to our car yet touching our stuff.. how dare he!! Dad walked out looked at the pole and said WOW! yes that works. He went to thank the man and  POOF!! he was gone! In a blink of an eye he just vanished. Mom and dad looked for him well. We kept on driving and guess what? We short stopped a kid ran across the street. To this day we all still speak about this angel experience. We know we were saved by an angel. Youtube – Facebook

Sign Up!For Your Free pdf: Learn The Secrets On How To Use The Zodiac To Flame Your Romance PLUS BONUS weekly Free Tarot Scope & Discounts [mc4wp_form]